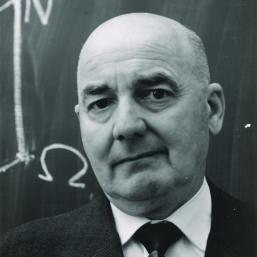 Let's talk about Helmut Hasse who gave his name to the Hasse diagrams that are an essential part of partial ordering, at least in your PyHasse software. When did you learn about Helmut Hasse and what is so special with his theory?

That is a nice question for me, however a complete answer may be pretty lengthy and possibly boring for others. But in short. As a child I liked to connect literals in the newspaper following several own defined rules and I was curious, to see what comes out. For example, what is the result, when I connected all "k's" in different lines. Later, as student of chemistry I was fascinated by a lecture of Professor Ruch where partially ordered sets and their visualization by Hasse diagrams played a role. This talk was given around 1975. Since this time I was aware of Helmut Hasse. To the other part of your question: "What is so special with his theory". I guess that, as a (mathematical) chemist, I have always been interested in expressing theoretical facts in form of points, which for example represent some aspects and see how such aspects could be connected if they are related either by similarity or by causal arguing - and we have the lines in the Hasse diagrams -. A Hasse diagram, made popular by Helmut Hasse, is one possible realization of this idea. Topological indices, which are widely used in mathematical chemistry are another example, resulting from a representation of molecules by points (atoms) and lines (the bonds between the atoms) and in sociology relations between persons are often expressed by diagrams, consisting of points and connecting lines.

Can you give a simple example?

The most famous example usually represented in mathematical lectures has its origin in number theory. However, I think this kind of example will be too difficult to explaining in plain words here. Another example (which is almost trivial) is: Think of Xmas time and you have to select some gifts for your children. Assume three gifts. Gift 1 is beautiful and stable, gift 2 is slightly less beautiful and less stable than gift 1, gift 3 is strongly less beautiful and less stable than gift 2. Then you can order the gifts following the criteria beauty and stability. Gift 1 > gift 2 > gift 3. This is an order and I guess you will select gift 1 as it is both the most beautiful and stable. Unfortunately gifts have their prices and we must consider as to how far the gifts are low-priced. Let us assume that based on to the prices the order of the gifts is: gift 3 < gift 2 < gift 1. Now there is a conflict: If you have money, gift 1 would be wonderful in based on its properties 'beauty' and 'stability' but too expensive compared to the other gifts. For example gift 2 is not as beatiful but is not as expensive as gift 1. The analysis of such conflicts can be done by means of partial ordering.

So am I no more depending on suggestions made in online portals or other catalogs?

Additionally to suggestions from online portals or other catalogs you can apply PyHasse if you have the data.

And for scientists, when would you recommend PyHasse instead of other mathematical techniques like statistics or ...

The simple answer is here the user friendliness of PyHasse. Even if a modern development would provide the macro-oriented statistical software R specifically for partial order many scientists are more happy with a button-oriented procedure as realized in PyHasse that contains a variety of specific tools and can be used without the need of writing more or less complicated scripts as necessary for using R.