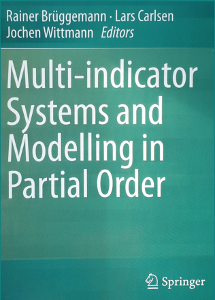 The software package PyHasse offers a comprehensive selection of modules of ordinal analyses of data matrices, in particular partial ordering. The development of PyHasse started in 2007 and was intended as the successor of the program WHASSE, developed in the 90ties. Today the software package PyHasse contains more than 100 specific modules. However, the distribution of the package appears inconvenient and the actual use may be found somewhat troublesome and not specifically user friendly if not having at least some appropriate background. Thus, this – complete – version of PyHasse, considered as an “expert version”, in the future known as PyHasse-exp, will still be available on demand. However, a new internet based software package - PyHasse-inet - is under development. The PyHasse-inet will contain a limited number of modules, comprising the basics for partial ordering studies and is intended to be a more user friendly version for non-experts in the field that want to explore the benefits of ordinal analysis of data matrices.

Ranking, i.e., finding a total order for a set of objects is a task that is omnipresent in today’s world and as such of increasing importance. As examples can be mentioned: cities may be ranked according to their life quality, nations are ranked with respect to child well-being, chemicals and polluted areas are ranked with respect to their environmental risk, cars can be ranked according to performance, etc. Typically such rankings can not be made based on a single parameter or indicator as a set of indicators is needed as proxies to describe the ranking aim. Hence, typically we are dealing with multi-indicator system (MIS). However, a set of objects together with a set of indicators lead to a data matrix and deriving a total order cannot be done canonically. Depending on how the order relation is defined most often it is not possible to derive a total order as a consequence of the fact that attempts to rank the objects by the single indicators will lead to different rankings Hence, a partial order is obtained. Within this context, the software packages PyHasse-exp and PyHasse-inet have the following main tasks:

Both PyHasse-exp and PyHasse-inet are obviously subjects for further development. Whereas PyHasse-exp typically will focus on developments of modules whose tasks are defined by the daily work applying methods of partial order theory on MIS, the development of PyHasse-inet will concentrate on the incorporation of modules of more general importance that will be appropriately reworked for the internet package.

Information about software requirements, installation and usage are available in the README-texts and the documentation of single modules on this website.